I started this blog in 2010 as I was finishing a book called Sleepwell and Fly, writing as Fletcher Moss, a name I stole from a park a few miles from where I live. (I'm still @fletchermoss on Twitter, and @fletcher__moss on Insta if you want to say hello.)

Eventually, in 2012, that book won the Times Chicken House Children's Fiction Competition. It was published as The Poison Boy in April of 2014.

The five years' of posts here cover 2010 to 2015, including my struggles with the original novel, stuff I learnt along the way, being longlisted for the competition, eventually winning it, and the process of re-writing, editing, and eventually publishing the book.

It did OK and I got another deal. My second novel is called Lifers, and I've shed my pseudonym. I blog now at martingriffinbooks.com.

I won't be updating this site beyond this post, and for a few years I took it down. But then I thought what the hell. Someone might one day find it useful.

Interlude: We've Got an Elephant!

Some writers seem to understand shape at some preconscious level. It’s in their damn DNA, it’s so deep. Ian Rankin talks quite openly about being his detective in first drafts – he has no idea where the story is going; he discovers things at the same time as Rebus. But the result is shapely and satisfying nonetheless.


Me? Most days it feels like I don’t know what the hell I’m doing.


At its worst, it feels like if I can screw up the structure of a story, I will. To use an analogy: I’ll pitch a beautifully sculpted elephant, then deliver a camel and a heartfelt apology. And my editors have to patiently unpick it all. (Thought about taking those humps off? What about adding a trunk? Plus – just asking Fletch – can we bulk this baby out a bit?)


Eventually, it looks sorta elephantine. But it’s miles away from the thing I first conceived.


Imagine my relief, then, when I saw this: 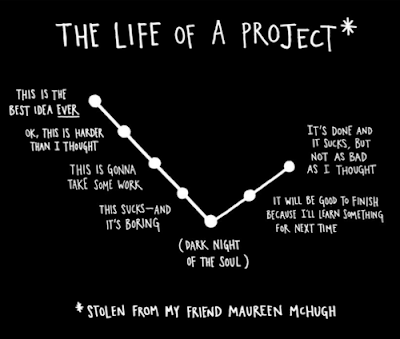 Thank you, Maureen McHugh. Thank you Austin Kleon. And most of all, a massive thank you to my editors. We’ve got an elephant at last.
Posted by Unknown at 03:42 No comments:

There’s this thing about writing and liquid – people talk about the writing process like we’ve each got some sort of creative plumbing system, and it’s either running smoothly or mis-firing. When things are going well, we say the words ‘flow’, as if all our valves and chambers are flooding beautifully, and when the process slows or stops, we say the words have ‘dried up’ or worse still, that we’re ‘blocked’.

I guess one of the reasons I don’t ever worry about or experience ‘writer’s block’ is because I don’t particularly subscribe to this metaphor of flow or block in the first place. This isn’t an act of will on my part; even on a subconscious level I don’t ever consider the creative process in terms of water.

Unless it’s frozen water, that is.

I was struck recently by American sitcom writer and comedian Amy Poehler’s much more revealing comparison that writing is like hacking icefrom the inside of a fridge with a screwdriver. Now this is way more my line of thinking. Poehler’s image emphasises hard work over ease; dogged persistence ‘chipping away’ over effortless ‘flow’.

So my advice in short? Don’t believe in writer’s block, and suddenly, it doesn’t exist.

Instead, writing becomes a process that requires effort and optimism. Sit down at your desk with a song in your heart, friends. And as you spend a few moments contemplating the task ahead of you, try the following: